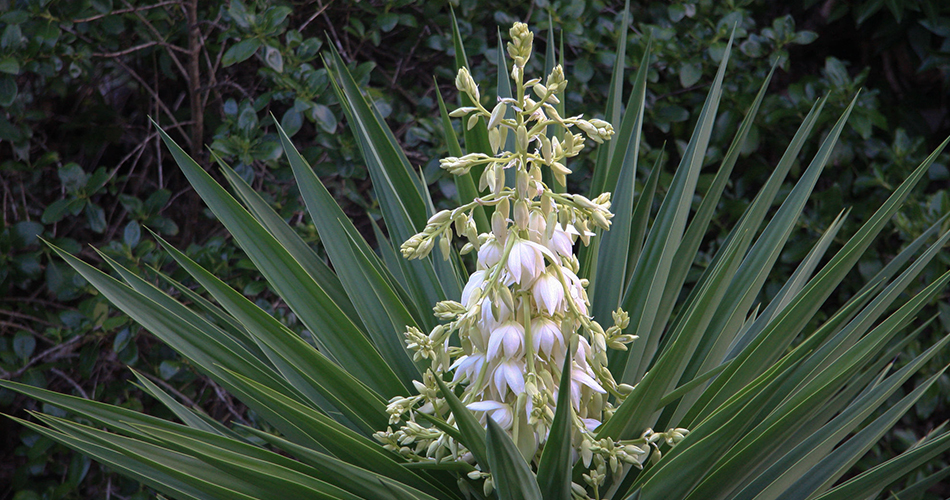 Yucca is both a plant and a moth. They have developed a symbiotic relationship and neither can live without the other. Yucca plants are members of the lily family. They bear huge clusters of bell-shaped, drooping flowers which are usually white; they have stiff, sword-shaped leaves. They grow wild in southern United States, Central America, Mexico, and the West Indies. The pollen of the yucca flowers is too moist to be carried by the wind, so it depends on the yucca moth to fertilize its flowers.

Yucca moths are small and white. The female moth gathers the pollen from one flower, rolls it into a small ball, and carries it to another flower. Into each of the pollinated flowers she lays her eggs. While the young pod of the flower is growing the eggs hatch and the young larvae feed on about half of the growing seeds. When the larvae are mature they leave the pod which later splits open and release the seeds that are left.

One common species of yucca plant, which grows wild in southern regions, is cultivated in the northern United States. It is called Adam’s needle because of its sharply pointed leaves. In California the Joshua tree occurs in desert areas. It may grow 35 feet tall and has many coarse branches.

The fiber of several species is used in making rope. The juicy fruits of some species may be eaten; the pods of others may be used as a substitute for soap.