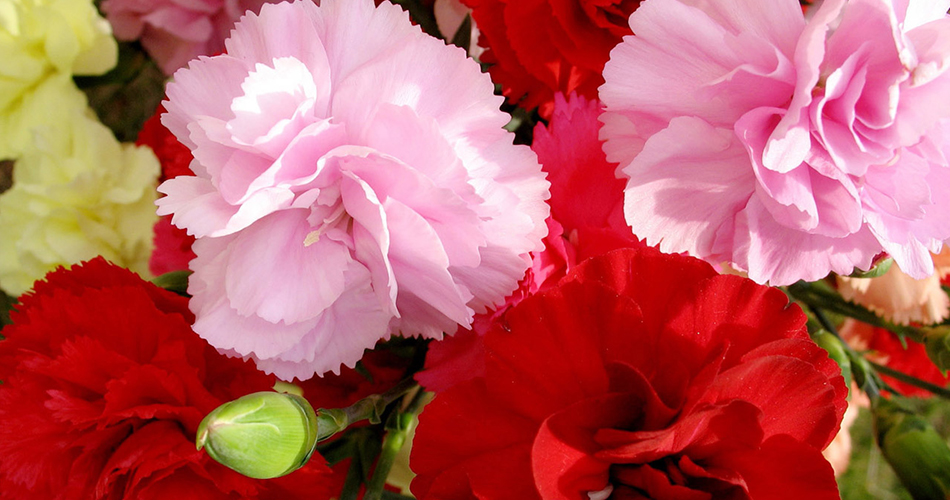 CARNATION is a flowering plant, Dianthus caryophyllus, of the pink family (Caryophyllaceae). It usually grows from 2 to 3 feet high. The leaves are slender and grass like, and the blossoms are fairly large. They have toothed edges and a rich, spicy fragrance.

The carnation is native to southern Europe. The original flower was white, but a variety of color forms have been developed; flakes have stripes of one color; bizarres are striped with two or three colors; picotees have a narrow band of color along the edge of the petals; and fancies are mottled or spotted. In England and other countries where the climate is suitable, the carnation is grown outdoors as a border flower. This form is harder and more fragrant than the greenhouse carnation. The border carnation is seldom grown in the United States because it requires cool summers and mild winters.

The greenhouse, or florist, carnation is an important commercial plant in England and the United States. Carnations originally came from southern Europe, but several varieties are grown in the United States, both outdoors and in greenhouses. The carnation may bloom throughout the year, depending on its cultivation and the climate. Carnations are usually raised by planting young shoots from the stems of mature plants, or by 1 bending one of the stems into the ground again so that it forms a new root Carnation plants require a rich, loamy soil combined with a small amount of manure, leaf mold, and some sand.