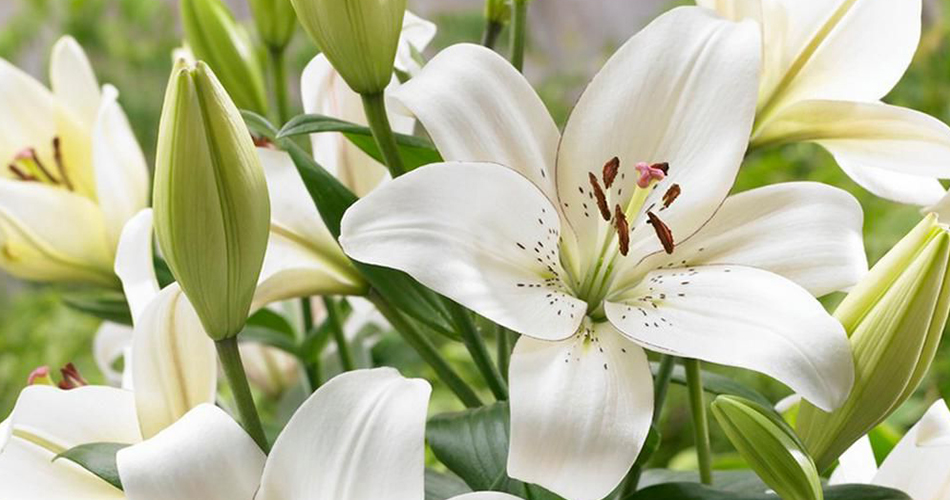 Lily. The white lily stands for purity. Artists for centuries have pictured the angel Gabriel coming to the Virgin Mary with a spray of lilies in his hand, to announce that she is to be the mother of the TURK’S. LILY is the family name of about 2,000 species of plants. Most are herbs (plants without woody stems). The family includes onion, asparagus, tulip, and hyacinth. The name comes from a group of perennials of the genus Lilium, often called the true lilies. Of the 80 or 90 species known, about 24 are natives of North America, about 50 are Asian, and 12 are European. True lilies have underground bulbs made of overlapping scales which contain stored food. Their flowers (except for rare double forms) have three sepals and three petals so nearly alike that all six often are called petals. The blossoms grow at the top of a leafy stalk. They are of many colors and shapes. Among the most beautiful are the white Madonna (Easter) lily; the Japanese Turk’s-cap with orange flowers spotted with red; the clustered dark-orange, purplish-spotted tiger lily; the scarlet coral lily; the gold-banded lily of Japan; and the pink Speciosum lily.

Lilies (chiefly lily bulbs) have served as human food in many countries. The ancient Greeks and Romans used some kinds in making certain salves and ointments. Lilies appeared as pottery decorations, in paintings, and in other forms of art hundreds of years ago. Species from many lands are cultivated in a number of countries, especially in Europe. From them, plant growers have developed popular hybrids and varieties of many colors and shapes, suited to different climates and uses. In most of the United States lilies bloom in almost every color (except blue). They can be grown from early summer to frost. Some kinds are grown as house plants. Many are raised each year in commercial greenhouses, especially for Easter.

To supply gardeners and other growers, thousands of different kinds of lily bulbs are raised in the United States, Japan, Bermuda, and many parts of Europe. New bulbs may be produced in several ways:

(1) By natural division of older bulbs.

(2) By small bulblets produced underground above or around the bulb.

(3) By aerial bulblets that grow in the leaf-axils of some species.

(4) By seeds, and from scales taken from bulbs. The word lily is included in the common name of many plants that are not true lilies. Among these are day lilies, plantain-lilies, Mari-pose-lilies, and trout-lilies or dogtooth violets. All of these are in the lily family but not of the genus Lilium. Others are calla lilies, in the same family as Jack-in-the-pulpit; belladonna lilies, of the Amaryllis family; and water lilies.