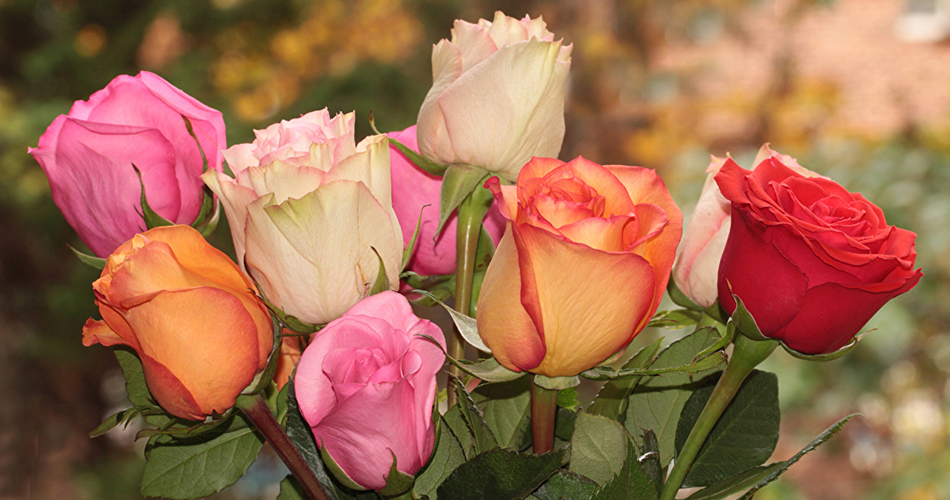 Rose is one of the most beautiful of all flowers. It is a symbol of fragrance and loveliness. Its name calls to mind pictures of the sweetbrier, or wild rose, the loveliest wild flower of the country roadsides. No other flower has been mentioned so often by the poets of all ages and all countries. In the language of flowers its blossoms have always been the symbol of love. The rose has even played its part in history. In England, when the Houses of York and Lancaster were fighting for power, they chose white and red roses respectively for their emblems. The flowers gave their name to the War of the Roses. Today the rose is the national flower of England. It is also the state flower of several states in the United States. The rose is not limited to any one country, however. Its many species and varieties can be found throughout the Northern Hemisphere. They will even grow in the mountain districts of the tropics. All present-day roses are descendants of wild roses. We may doubt this if we compare a full-flowered cultivated bloom with a five-petaled swamp or prairie rose. But many wild-rose species tend to bear double blooms—flowers with more than five petals. A skillful gardener can select a wild rose plant that shows an occasional double blossom, give it and its descendants expert care for several years, and produce plants that consistently bear handsome double flowers.

Until the 19th century all rose culture was of this type. Many species were popular for cultivation, including cabbage, damask, and French roses. The cabbage (Rom centifolia) is a large pink rose that grows wild in the Caucasus. It was cultivated in ancient Greece and Rome. Later the French called it Flower experts recognize three main classes of cultivated roses. Members of the first class, sometimes called old roses, bloom once a year, usually in early summer. They include the yellow briers, damask roses, moss roses, and many climbers. The second kind of roses bloom in early summer and again in fall. The best-known members of this class are called perpetual roses or summer-and-autumn roses— are the hybrid perpetuals. Members of the third main class, the ever blooming hybrids, flower almost constantly during the growing season. These roses include floribundas, grandifloras, hybrid teas, and polyanthas.