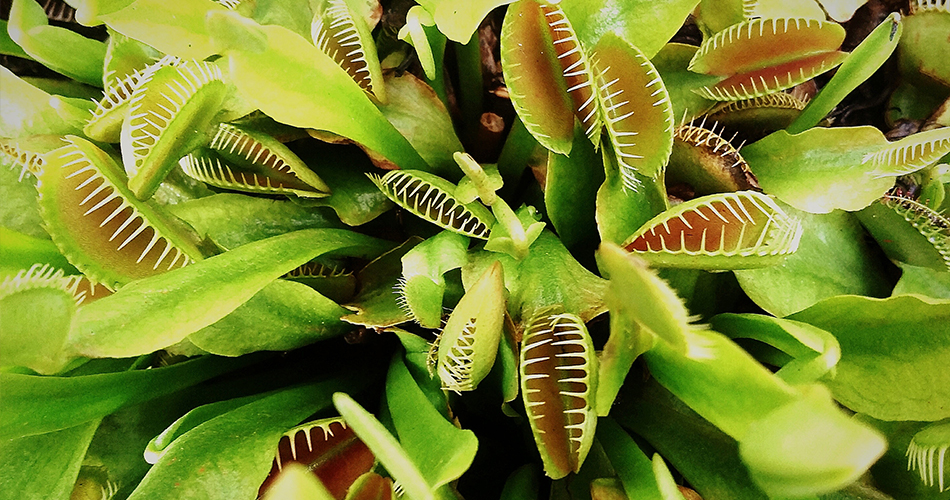 CARNIVOROUS PLANTS are plants that are able to capture insects and certain other small animals and consume them for food. These plants do not actually chew and swallow their prey as animals do. Instead, most carnivorous plants secrete juices that act life the digestive prices of the stomach. The victim is decomposed by these juices, and the decomposed matter is absorbed into the plant.

The rounded, or spoon shaped, leaves of sundews are covered with tentacles, each of which holds a drop of mucilage (a sticky liquid) at its tip. These drops glisten in the sunlight like dewdrops, thereby giving the plant its name. When an insect crawls onto a leaf, the mucilage holds it fast as the insect struggles to get free the plant secretes more liquid until at last the insect is smothered. In a short time the tentacles close around the insect’s body, and the plant secretes the juice that digests the victim. Digestion may take several days. When it is complete, the tentacles open, and the plant awaits another victim.

Sundews always grow in wet places. They are found in many parts of the world. The greatest variety of species grows in Australia and southern Africa. The few species that grow in North America are widespread across the continent

Butterworts have oval, yellowish-green leaves that are greasy in appearance because of their mucilage coating. When an insect alights on one of these leaves, the mucilage holds it and the leaf begins to curl inward. The plant secretes more mucilage, and, when the insect is trapped, the digestive juices are secreted.

Butterworts are found throughout the North Temperate Zone. The most widespread species is Pinguicula vulgaris, also called the bog violet because its purplish blossoms resemble violets.

Venus’s – Flytraps and Bladderworts. Perhaps the most remarkable of the carnivorous plants are the group that have trap like mechanisms. The leaves of the well-known Venus’s-flytrap (Dionaea) look somewhat like open clamshells. Each leaf is composed of two semicircular halves, or lobes. The outer edges of the lobes are fringed with stiff bristles. On the inner side of each lobe are three extremely sensitive bristles. Insects are attracted to the leaves by nectar secreted near the edges of the lobes. When an insect brushes the trigger hairs, the trap snaps shut and the fringe of outer bristles interlock like fingers of clasped hands. In a few days the captured insect is digested, and the trap reopens. The trap, however, is able to feed only two or three times at the most before it turns black and shrivels up.

The Venus’s flytrap is found only along the coasts of North and South Carolina. It grows nowhere else in the world. It thrives in moist areas, often in company with pitcher plants and sundews.

Bladderworts (Utriculcrim) also capture their victims with trap like parts. These small aquatic plants may be free floating or anchored to the bottom of a pond or swamp pool. Only the flowering stalks rise above the surface. Among the submerged leaves are tiny baglike growths. At the mouth of each of these bladders is a trapdoor. The trapping mechanisms vary among the several species, but the common bladderwort, Utricuhria vulgaris, has stiff bristles at the opening of the trapdoor. Tiny insects or water animals, such as crustaceans and larvae, brush against these trigger bristles, causing the trapdoor to open. The water rushes into the hollow bladder, sucking the creature inside; where it is digested. The trapdoor then resets itself. Unlike the Venus’s flytrap, the bladderwort is able to continue trapping victims for a longer period of time.