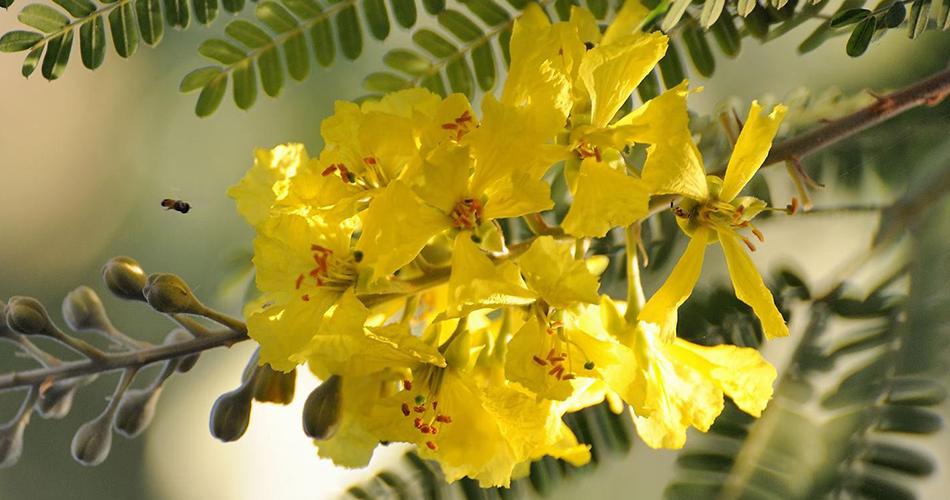 ACACIA (a-ka’sha). About 1200 species of acacia are scattered through the warm regions of the world. Most of them are shrubs or small trees. Some are matted plants a few inches high. All are thorny and pod-bearing. The tiny sweet-smelling blossoms cluster together in fluffy balls or cylinder shapes. They range in color from deep yellow to almost white. The leaves are usually grayish and fernlike. The acacia is quick-growing and short-lived.

Australia has about 300 species of acacia. The early settlers called them wattles because they used the plant branches to make wattle-and-daub huts. The golden wattle is Australia’s national Bower.

In the southwestern United States acacias are grown in many parks and gardens. The ornamental species were imported from Australia. The native catclaw (Texas mimosa) grows wild and (Types Of Flowers ) is heartily disliked because of its strong hooked spines. The Arizona Indians, however, made meal of the pods. Smaller acacias are eaten by cattle and horses.

Gum arabic is obtained from an African species (see Gums and Resins). The Australians get tannin, used for tanning leather, from the bark of some species and make furniture of the hard, dark “black-wood” of acacia. The wood of an Indian species is the chief source of catechu, a dye for true khaki. France grows several kinds for perfume.

The genus acacia belongs to the mimosa tribe of the pea family. The black locust is sometimes called “false acacia” . The plant that florists call mimosa is actually an acacia.

Several products in the food and manufacturing industries are obtained from acacia. The best known of these is gum Arabic which is used in both candy and medicine. Other acacia gums are used in dyes. Tannin, used for tanning leather, comes from the bark of some acacia trees, especially the wattle.

There are only a few members of this genus in the United States. The most important of these is the cat’s claw tree. It is found on the dry, steep hillsides and canyons of the Southwest. Acacias also are grown in California where the winters are mild. Indians use the seeds from the pods as food. In the United States the name acacia sometimes is used for locust trees, which are members of the same family. Both the bristly and clammy locusts have been called rose-acacia.