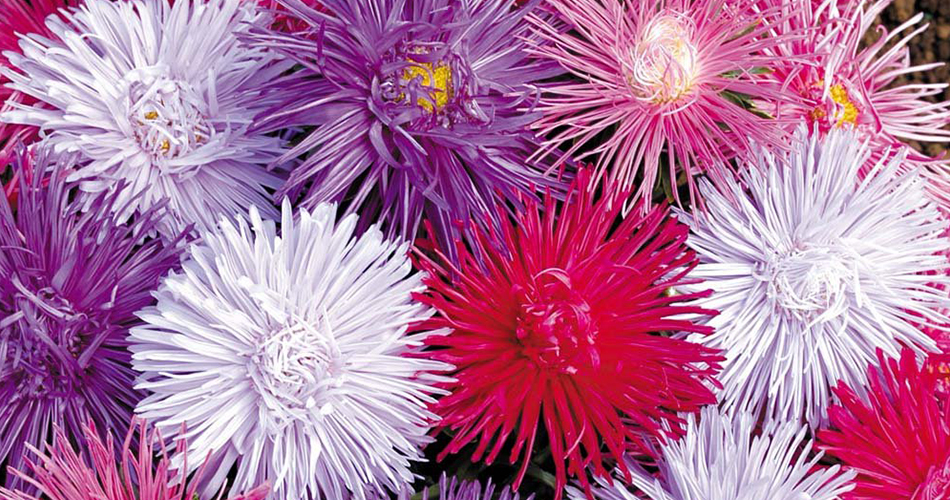 ASTER is a flowering plant of the Compositae family. It is so common in the United States that it has been suggested as the national flower. More than 175 species grow in North America. The flower also grows in parts of Europe, Asia, and South America. Toward the last of August and throughout September and October, these beautiful starry wild flowers burst into bloom. The aster (from the Greek aster, meaning “star”) was so named because of its radiating or starlike flower head. It is found largely in North America.

Asters are usually perennial plants. The flowers have yellowish or brownish disks encircled by white, purple, violet, blue, rose, or pink rays. Two handsome species are the New England aster, with its numerous large violet or purple rays, and the New York aster (Aster novi-belgii), which has light blue and white blossoms. They bloom until after the first frost. Both of these are common in the northeastern United States.

The aster is related to the daisy. It gets its name from the Greek word for star. The blossoms may be from one-half to two inches in diameter. They vary in color from white through pink, red, and blue. All have flat yellow centers surrounded by many narrow petals.

Most asters are perennial (grow year after year). They bloom in late summer and early autumn. Asters are popular garden flowers because they bloom after other flowers are gone, have few diseases and insect enemies, and last well after cutting. Some common types are the purple New England aster, the smooth blue aster, and certain desert asters. The China, or garden, aster is not a true aster. It is an annual grown from seed each year.

All species of aster need rich soil and sunlight to grow well, but they cannot stand much hot weather. Wild asters can be transplanted to gardens without harming them.

Asters belong to the family Compositae. The New England aster (Aster novae-angliae) has flowers 1 to 2 inches across. From 30 to 40 violet or purple ray florets surround 5-lobed, tubular yellow disk florets, set in a sticky green cup. The rough stem is from 2 to 5 feet high. Long leaves grow directly from the stem.

Most asters are difficult to grow from seed. The plants can be broken into several pieces and transplanted in the spring. They thrive in almost any type of soil. The China aster, an annual, is grown from seed.

Scientific classification. Asters are in the composite family, Compositae. The scientific name for the New England aster is A novae-angliae. The China aster is Callistephus chinensis.