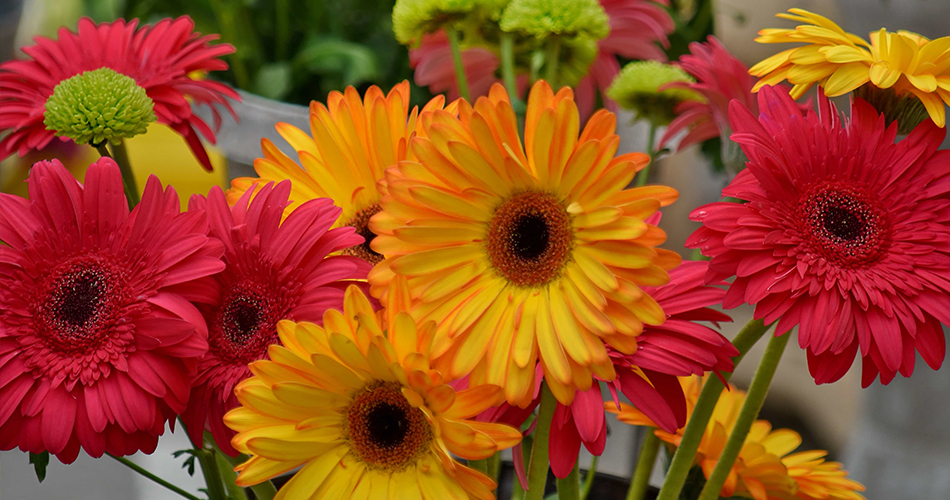 CHRYSANTHEMUM is a genus of about 100 species of plants in the family Compositae. The chrysanthemum has been cultivated in the Far East for more than 2500 years. It is the national flower of Japan, It was introduced into England in 1789 and was taken to the United States in the early 19th century, from small species that grew wild in China and Japan, and thousands of varieties have been developed through crossing, selection, and mutation.

The word chrysanthemum comes from Creek words that mean gold and flower. The flowers now range in color from white and yellow through pink and lavender to deep red. The sizes vary from pompons, less than an inch across, to blooms 8 inches or more in diameter. There are 15 distinct bloom forms of chrysanthemums, which differ chiefly in the shape and arrangement of the petals. Petals may be flat, fluted, quelled, feathery, fringed, or curled. Blossoms may be single, semi-double, or double.

Chrysanthemums thrive in fertile, well-drained soil and full sunlight. They grow from cuttings or root divisions. They are either annual, lasting only one year, or perennial continuing to live from year to year. Gardeners like to grow chrysanthemums because of their variety of size, shape and color. The 3000 varieties in cultivation may be divided into two main types those that are cultivated in a greenhouse and forced for winter bloom and hardy varieties that grow outdoors and bloom in late summer and fall. All chrysanthemums bloom outdoors if they are protected from frost.

The only species of economic importance are certain forms of pyrethrum, Chrysanthemum coccineum. Their flower heads are the source of pyrethrum powder, an insecticide.