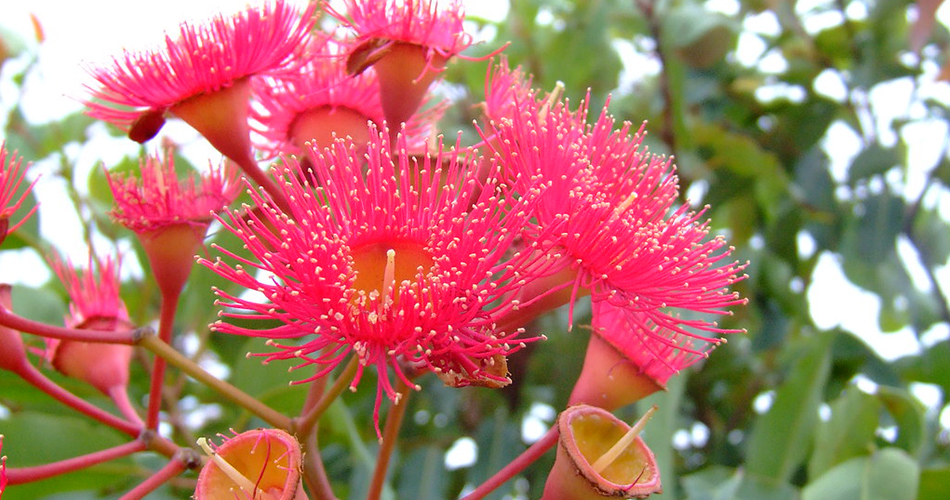 EUCALYPTUS. Of the interesting trees which grow in Australia, none has been adopted by the outside world with such enthusiasm as the eucalyptus. This tall, hardy, heavily leaved tree, a member of the myrtle fitfully, has been introduced successfully into Europe, Algeria, Egypt, India, South America, and southern United States. With its tall, straight trunk and its large green, smooth-edged leaves, it is unusually striking in appearance. The saplings have been known to grow as much as 13 feet in one year; one tree has been known to reach a height of 326 feet. The flowers, small, white, and ball-like, change into cup shaped fruit which is filled with tiny seeds. While there are many species of the eucalyptus, the most popular are the blue gum, the jarrah tree, the manna gum, and the stringy bark tree. The uses of the eucalyptus are numerous. Because they require a great amount of moisture, these trees are often planted in malarial regions, where they help to draw water out of mosquito-infested swamps. In California the eucalyptus is a popular ornamental tree, and the trees are also sometimes planted in long lines to form a windbreak about orange and lemon groves. From the pores with which the leaves are dotted comes a straw colored oil, somewhat resembling camphor in odor, which is considered useful in medicine for its antiseptic and stimulating properties. The wood is of such an adaptable nature that while its toughness and durability make it valuable in building docks and ships, it is also in demand for house interiors because it may be given an attractive, highly polished finish. In Australia the bark is employed in tanning and the wood is used for fuel, while a fiber valuable in making cord and paper is taken from the inner bark.

Manufacturers use eucalyptus lumber for ships, railroad ties, paving blocks, telegraph poles, fences, and piers. The trees furnish a resin, called Botany Bay Kino that protects wood against shipworms and other borers. The bark of some species of eucalyptus trees furnishes tannin, which is used in medicine. The leaves contain valuable oil that is used as an antiseptic, a deodorant and a stimulant.