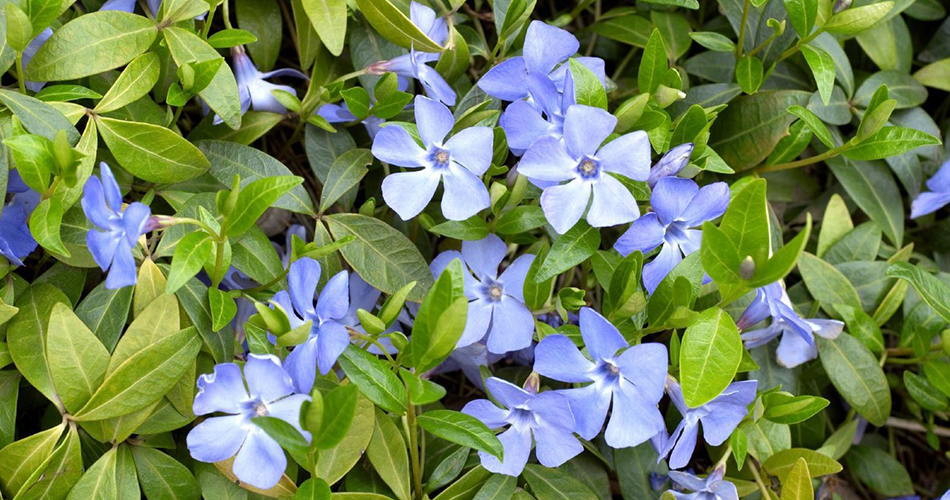 Periwinkle (per’iwing’k’l) is any of the trailing or erect plants that make up the genus Vinca. The genus belongs to the dogbane family (Apocynaceae). There are three common species of periwinkle. One (V. minor) is known by several names-lesser, creeping, running, or grave myrtle. It has small, glossy, oval leaves that remain on the plant all winter. Lesser periwinkle creeps on the soil’s surface, forming mats. In early spring, blue flowers appear. It is frequently used, therefore, in cemeteries as a grave covering. Greater periwinkle (V. major) is a long vine with blue flowers and roundish leaves, often edged with white. It is grown by florists for window boxes. Madagascar periwinkle (V. rosea) is an erect plant, grown as an annual. It is usually less than 18 inches high and looks somewhat like a small bush. Red, pink, or white flowers cover the plant during the summer and fall.

Vincas, as periwinkles are also called, grow well in shady places. The vine species are grown from cuttings of the stem. The annual is grown from seeds. The vines frequently root along the stems where they touch the soil. These may be dug up and cut off to be planted elsewhere. This is called layering.

Periwinkle is also the name for several types of marine snails.