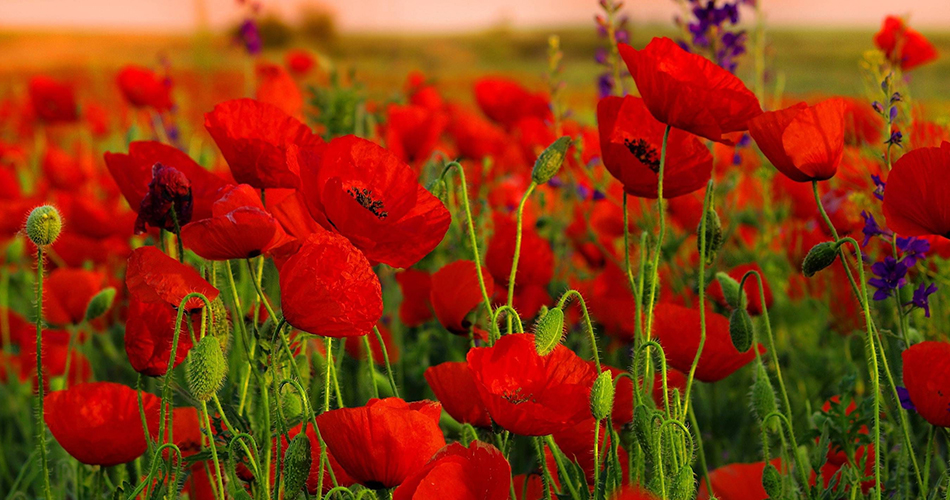 Poppy (pop’e) is the common name of many species of plants of the poppy family. All of them have milky or colored juice and usually showy flowers. Some poppies grow wild in almost every country in the North Temperate Zone. Several kinds are raised in gardens for their large, many-tinted flowers.

Oriental poppies, natives of the Mediterranean region, have the largest flowers, often six to eight inches across, white to red in color. Iceland poppies, from arctic regions, have small, fragrant flowers of different delicate colors. Alpine poppies are low-growing rock garden Perennials with sweet-scented yellow or white flowers. The popular, many-colored Shirley Poppies are cultivated forms of the corn, or Flanders poppy, a common wild flower of Europe and Asia. They are annuals.

The opium poppy, with gray-green leaves and white to purple flowers, is sometimes grown in gardens. It is widely cultivated in eastern countries for opium, made from the juice or its unripe seed pods. The ripe seeds are used in baking. Growing the plant is illegal in the United States. (See Opium.)

The plume poppy, native in eastern Asia, is a tall, bushy plant with bluish-gray leaves, topped by a showy cluster of white flowers. The California poppy, with satiny, creamy to bright orange flowers, grows wild in western United States. Cultivated varieties may have single or double flowers, some in shades of red. Prickly poppies are natives of the warm, dry parts of the United States. They have white, yellow, or purplish poppy like flowers and thistle like leaves. They become weeds in some places.

Poppies grow best in sunny places. Most kinds do well in ordinary garden soil. Seeds should be planted in the fall or in very early spring. Some poppies self-sow. Oriental poppies, true perennials, are grown from seed or from root-cuttings. Iceland and California poppies are perennials that bloom in their first season if the seeds are planted early.