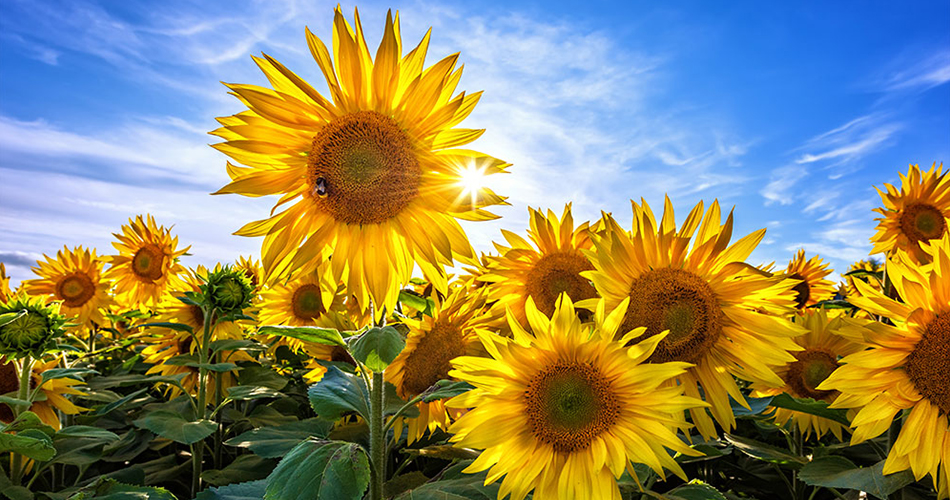 Sunflower is a tall plant known for its showy yellow flowers. There are more than 60 species of sunflowers. The most common type grows from 3 to 10 feet (1 to 3 meters) tall and has one or more heads of flowers. Each head consists of a disk of small, tubular flowers surrounded by a fringe of large yellow petals. A sunflower head may measure more than 1 foot (30 centimeters) in diameter and produce up to 1,000 seeds. The head turns and faces toward the sun throughout the day.

Sunflower seeds are rich in protein. They yield a high quality vegetable oil used in making margarine and cooking oil. Some varieties of sunflowers have large striped seeds, which are roasted for snack food or blended with other grains to make birdseed. Special oil-seed varieties produce small black seeds that contain up to 50 per cent oil. Sunflower oil is the world’s third most important vegetable oil. Only soybean oil and palm oil are produced in greater abundance. Sunflower oil is sometimes used as a replacement for diesel fuel.

Before its breakup, the Soviet Union produced more sunflower seeds than any other nation. In the United States, production increased rapidly during the mid1970′s as a result of improved varieties and in response to a growing demand for sunflower oil. The chief sunflower states are Kansas, Minnesota, North Dakota, and South Dakota.