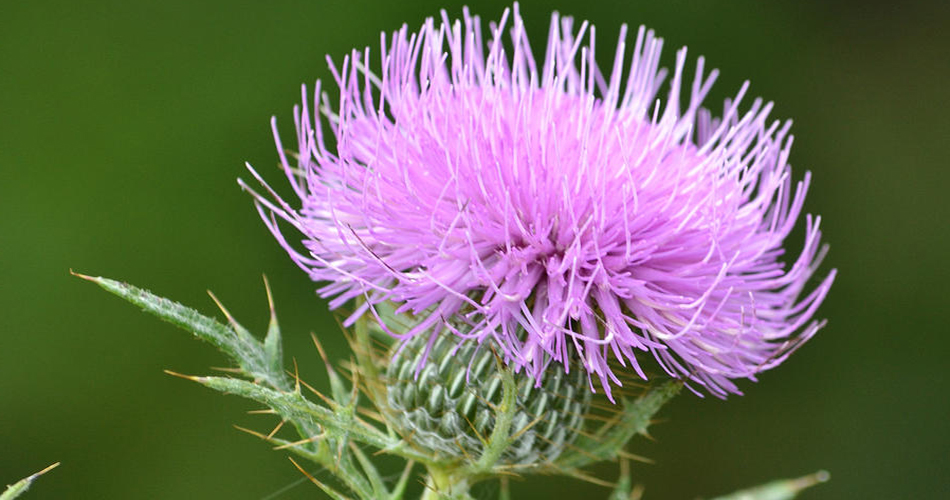 Thistle is a term applied to many kinds of plants which have noticeably prickly or spiny leaves or stems. Many of them are troublesome weeds. Others, such as the globe and star thistles, are grown as ornamentals. Star thistles are close relatives of the cornflowers, or bachelor’s-buttons. The Russian thistle, or turn-blueweed, belongs to the same family as the beet. It was introduced into the United States from Russia in flaxseed. When mature, tumbleweeds break off at the surface of the soil. They may be blown long distances by the wind, thus scattering their seeds. The weed is especially troublesome in the western United States.

The most common thistles, as well as the globe and star thistles, belong to a special group of the very large family Compositae. Their small tubular flowers, which range in color from purple to white or yellow, are borne in prickly heads. When all the flowers in a head have finished blooming they wither and their small dry, seed like fruits ripen. Each fruit develops long silky hairs. The fruit may then break from the head and be borne away by the wind. Thistles may be spread long distances in this manner. There are several very troublesome thistles in the United States. One of these is the large bull thistle common in pasture lands and fields in the eastern states. During its first year of growth it develops a large coarse rosette close to the ground. The second year the stem elongates, bears flowers, and matures seed. The whole plant then dies. Probably the most troublesome of all thistles is the lavender-flowered Canada thistle. Smaller than the bull thistle but more persistent as a weed, it lives many years instead of only two. It spreads by means of seeds and through its long underground stems or rootstocks. These stems are not reached or dug out readily by cultivation tools. They are easily broken, however, and each broken part left in the soil will form a complete new plant.