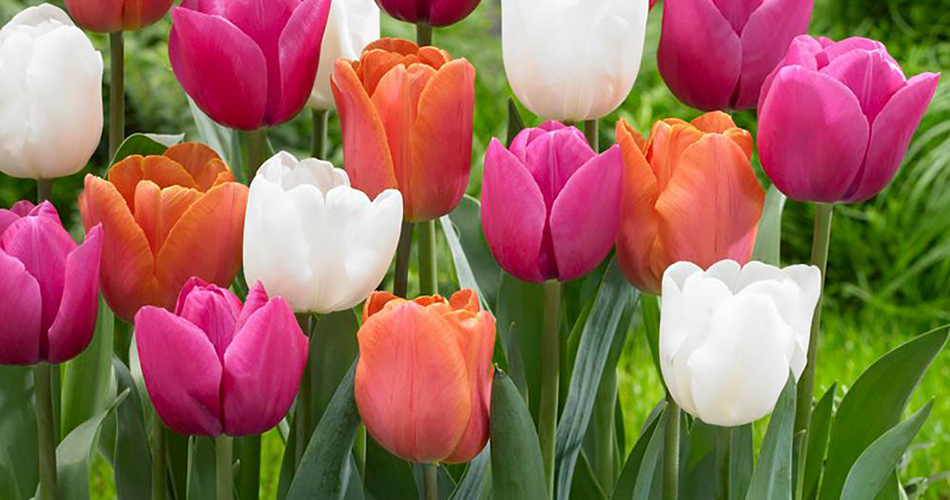 Tulip (tu’lip) is any of the flowering plants that make up the genus Tulipa. This genus belongs to the lily family (Liliaceae). There are about 160 species of tulips. They grow wild from Italy and Austria eastward across Asia to Japan. Common garden tulips are thought to have developed from only a few of these wild species. Plant breeders have produced thousands of garden varieties in a wide range of colors, sizes, and shapes.

Tulip blossoms are cup-shaped and grow pointing upward. Upside down they look something like a turban—in fact the word “tulip” comes from the Turkish word for turban. The plants grow from bulbs. They do not fare well in hot climates since a cool winter period is necessary to mature the bulbs. Well-fertilized soil is best for tulips. In Europe, the United States, and Canada the bulbs are planted in the fall. The bulb contains a stem and the beginnings of the next year’s flower and leaves, formed while the plant was in bloom. (See Bulb)

There are three main classes of tulips: early flowering, which usually have short stems; midseason, long stemmed with larger blossoms; and late flowering, which have long stems and the widest range of colors. Tulips came to Europe in about 1554 from Turkey, where they were being grown before 1500. They reached the Netherlands a few years later and became extremely popular there. The Dutch became so skillful in raising them that they are still the leading growers of tulip bulbs shipping large quantities all over the world. At one time tulips were so popular in the Netherlands that people paid huge prices for new varieties. During this “tulipomania,” tulip bulbs were the object of much financial speculation.