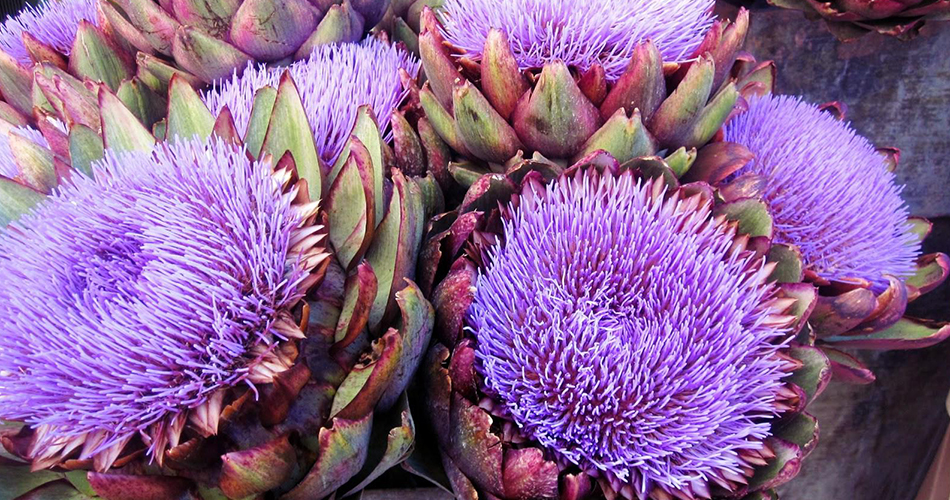 ARTICHOKE. Artichokes are vegetables that have a very delicate flavor. There are three different kinds of artichokes: the globe, the Jerusalem, and the Chinese or Japanese. The globe and the Jerusalem artichokes are members of the Composite family like the aster, daisy, and sunflower.

The globe artichoke is also called the French or bur artichoke. A native of the Mediterranean region, today it is grown chiefly in the United States and Europe. California produces most of the United State crop, but some are grown in the southern states.

The plants are gray-green and look like this-das. They have long prickly leaves large clusters of white or lavender flowers. The plant parts that are eaten are the tender base of the flower bud (often three to four inches in diameter) and the thick, soft parts of the leaves around the bud. These parts are cut while the buds are still tightly closed.

They are sold fresh or canned, and are eaten boiled, baked, fried, stuffed, or in salads or soups.

New plants usually are grown from sprouts or shoots from older ones. Plants may live for many years, but those raised for sale usually are replanted every three or four years.

The Jerusalem artichoke may grow 12 feet tall, and has yellow, sunflower like blossoms. It grows wild in eastern and central North America. Sometimes it is a troublesome weed because it reproduces from seed and from many small, underground, potato like tubers. The tubers are eaten raw or prepared like potatoes. In France the plant also is used as feed for stock.

The Chinese or Japanese artichoke, a member of the Mint family, comes from eastern Asia. Its tubers may be eaten, but it is not an important crop in the United States.