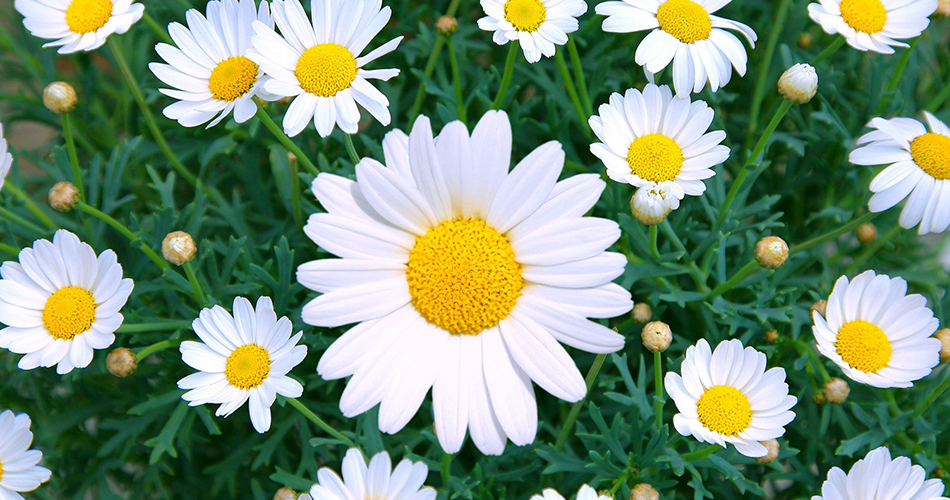 DAISY. Poets have been inspired by the daisy. Everyone knows some species or other. It may be the common white oxeye field daisy, or black-eyed Susan with its yellow-ray flowers, or the English daisy, a dwarf with pink or white rays and a golden center. The daisy takes its name from the early English description of the Bower as “day’s eye”—meaning that its petals close at dusk and open at daybreak to disclose the large eye or center. It belongs to the largest plant family in the world, the composite. It numbers among its more than 10000 members the chrysanthemum, dahlia, sunflower, aster, and dandelion.

In the United States the field daisy is often called white weed. It is sometimes considered a pest because it is a hardy perennial, increasing abundantly and crowding out other plants. The flowering heads are one or more inches across. They have a single outer row of pure white petals. These surround a central, closely packed cluster of tiny golden yellow flowers, which make up the eye. Such heads are borne singly at the tops of slender stalks. Many stalks arise from a cluster of deep green leaves which lies close to the surface of the soil.

Other kinds of daisies have been widely cultivated, and garden varieties can be had in a considerable array of colors. Burbank’s famous Shasta daisy is a Japanese species having large white dower heads up to four or more inches across. In the “language of flowers” the daisy stands for modesty and simplicity. Although it was transplanted from Europe to the United States during the 18th century, it seems so typically and beautifully American that it has been chosen by the American Legion as its floral emblem.