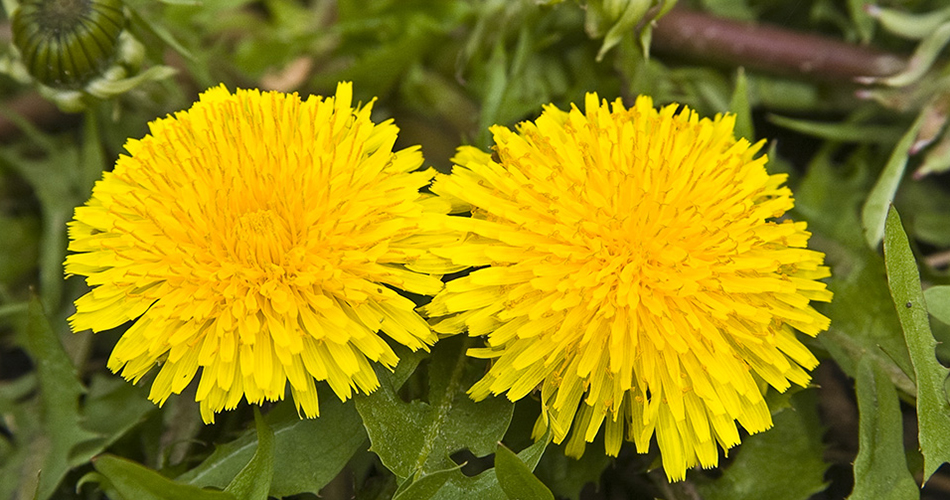 DANDELION. The word dandelion comes from the French dent de lion, meaning lion’s tooth. This name was given to the plant because of the toothed margins of its leaves. When the leaves are young, they are used for healthful salad or as greens. The plant has medicinal value. Its roots, like those of its relative the chicory, are sometimes dried, roasted, ground, and mixed with coffee or used as substitute for it. For these reasons dandelions are cultivated to some extent, and a number of improved varieties have been developed. The wild dandelion, of which there are several species, is a native of Europe and Asia It has spread throughout all temperate regions, including the United States and southern Canada. Its golden-yellow flowers that brighten fields, waysides, and neglected lawns in spring are beloved of childhood. However, everyone who has the care of a good lawn dislikes this weed and does his best to get rid of it. This may be accomplished readily by treating the plants with sprays which kill the dandelions but do not injure the grass. The dandelion differs from most other plants in the way it reproduces. Its ovaries form fertile seeds without having to be pollinated (see Pollen).

Young dandelion leaves can be used in salads or they can be cooked. They taste best when they are young, before the plant has blossomed. Wine sometimes is made from the dandelion flowers.

In order to keep dandelion plants from growing on lawns, gardeners must cut deep into their roots. The roots grow to about 3 feet (91 centimeters) long in soft, rich earth. Slicing close under the surface only encourages the plants to grow. Gardeners sometimes spray dandelions with chemicals that destroy the dandelions but do not harm grass.

The flowers close at nightfall and remain closed on a dark day. After fertilization, the flower head closes and the fruit clusters develop. When the fruit is ripe, the head opens into a globe of parachuted fruits, which a puff of wind will scatter far and wide.