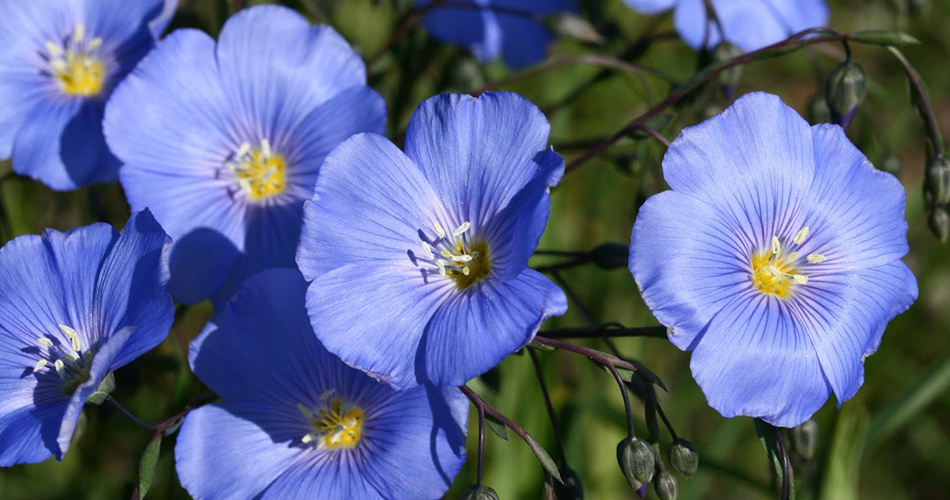 Flax is a plant raised for its fiber and seed. The fiber is made into linen fabric and a variety of other products, including rope, thread, and high-quality paper. The seeds contain linseed oil, which is used primarily in the production of paints and varnishes. There are about 220 species of flax. Only one species, Linum usitatissimum, is grown commercially. Different varieties of this species are grown for fiber and for seed.

The flax plant stands from 3.1 to 4.3 feet (0.89 to 1.3 meters) high and has either white or Uses of Flowers. The variety grown for fiber has a slender stem that branches near the top. Seed flax is bushier than fiber flax and bears more seeds.

Flax may be attacked by a number of fungus diseases; these diseases include rust, wilt, and pasmo. Before planting flax, farmers treat the seeds with chemicals called fungicides to provide protection against these diseases. Farmers also plant varieties of flax that are resistant to disease.

World production of fiber flax amounts to about 760,000 short tons (710,000 metric tons) annually. Before its breakup, the Soviet Union accounted for more than half the world’s fiber flax production. Other leading growers included France, China, Romania, and Poland, in that order. The United States and Canada do not raise fiber flax

Growing and processing fiber flax. Fiber flax grows best in cool, moist climates with rainy summers. It is planted in the spring after the danger of frost has passed. It is generally grown in rotation with other crops. Rotation helps reduce the effects of diseases.

Fiber flax is harvested three to four months after planting. If the plants are harvested too early, the fibers will be fine and silky, but weak. If the plants become too ripe, the fibers will be stiff and rough and difficult to spin into yarn. Farmers harvest fiber flax with a machine that pulls the stalks from the ground. On some farms, workers harvest flax by hand.