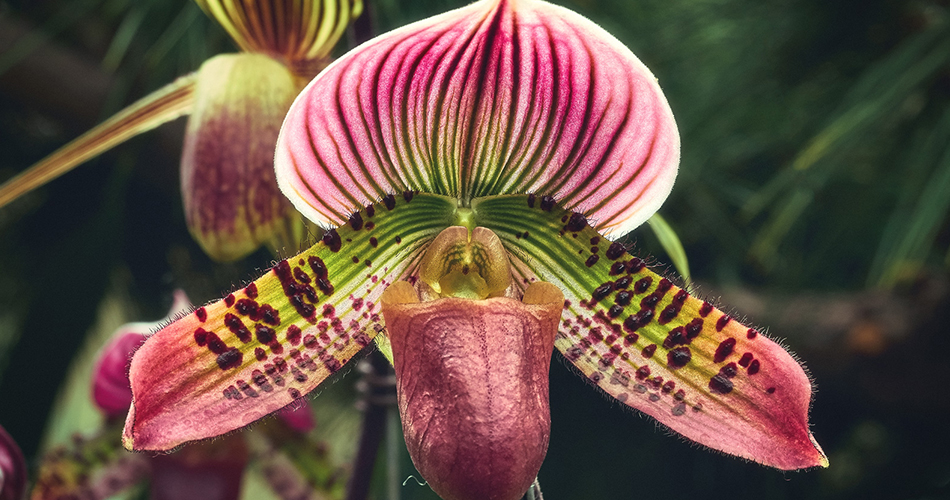 Lady’s slipper, a wild flower of the orchid family. It grows in cool, deep woods and damp marshes. About ten species are found in North America.

The Indians called one of the large pink lady’s-dippers the moccasin flower. Its Latin name, cypripedium, means “slipper of Venus,” the goddess of gardens. These names were given the plant because the lower part of its Sower shaped like the front part of a slipper. This pouch like slipper is usually gaily colored. In it is sweet nectar that attracts insects. Above the slipper part are two petals and three.

Some lady’s-slippers are only six inches tall. The largest kind grows to three feet. Perhaps the best-known species are the two pink lady’s-slippers which bloom in sandy woods or moist areas. They have rose-colored or pink-lined white pouches. The large yellow lady’s-slipper has a yellow pouch marked with purple, while that of the small yellow lady’s-slipper is clear pale yellow. All these flowers used to be common throughout the eastern and central United States and Canada. However, they are becoming rare because people often pick or destroy the flowers in the woods. Many kinds are grown in greenhouses. These have greenish, brown, or striped flowers.