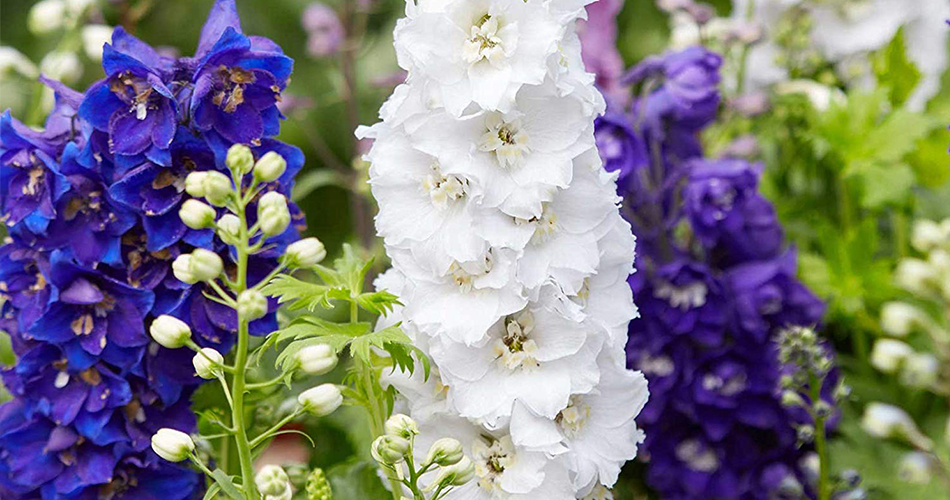 Larkspur is a favorite flower among gardeners. One of its petal like sepals is elongated into a spur, which resembles the spur of a lark’s back toe; hence the name larkspur. Because the unopened bud looks somewhat like a dolphin and because the Latin word for dolphin is delphinus, the flower is also called delphinium. The annual species larkspur and the perennial species delphinium.There are more than 150 species of larkspur growing wild in all parts of the world where the climate is mild. In addition there are over 1,000 cultivated varieties. The flowers of the most favored varieties are rather closely packed on tall spikes, often attaining a height of five or six feet.Each flower is made up of a single or double row of brightly colored sepals. Blue is the most common color, but purple, pink; white, scarlet, and yellow also occur. At the center of each flower are tiny fringelike petals, often covering the pistils and stamens. Inside the spur are two sacs filled with nectar which attracts bees and hummingbirds.Name is preferred by botanists. Many gardeners, however, like to divide these plants into two groups, calling the Larkspur is very easily cultivated. The plants grow best in deep, rich loam soil in places well exposed to the sun. Annual larkspur should usually be planted early in spring in the place where the plants are to bloom since they do not often with stand being transplanted. Perennial varieties however, are best started indoors in February or March and transplanted outdoors in April or May. The number of perennial plants in the garden can be increased by cuttings taken from plants that are already well grown. The tall graceful spikes blossom almost all summer.