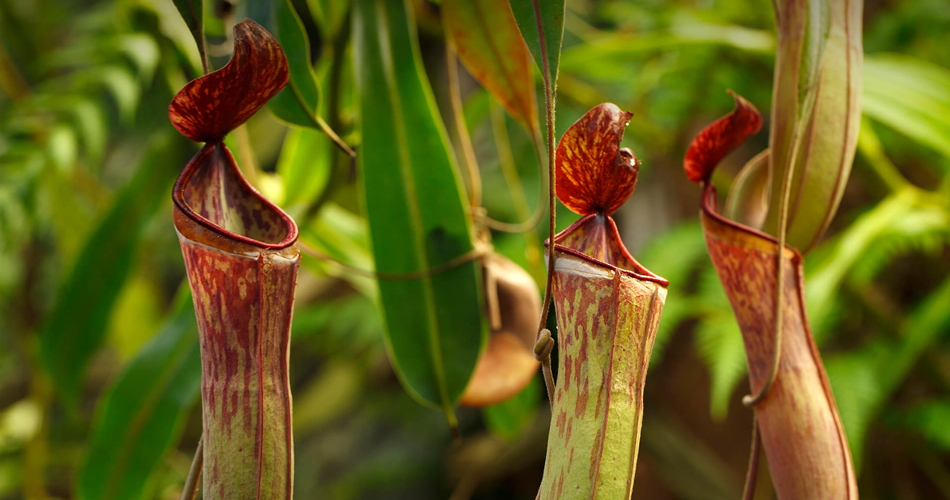 Pitcher plant is the name of a family of green plants with pitcher-shaped leaves that form traps for insects. Pitcher plants are called carnivorous plants because they feed on animal life (see Carnivorous plant), like other green plants, pitcher plants make their own food by a process called photosynthesis pitcher plants live in places where they get little nitrogen from the soil. The trapped insects provide nitrogen for the plants. These unusual plants have many local names. Among these names are sidesaddle sower, huntsman’s-cup, and Indian dipper. The common northern pitcher plant grows in marshes and swamps east of the Rocky Mountains from Labrador south to Florida. The lower edges of its leaves are folded together to form a tube, or pitcher. The top edges are left open to form the lid, or spout Rain water collects in these pitchers. Thick, bristly hairs grow at the mouth of each pitcher. These hairs all point downward and inward. Tiny honey glands cover the inner surface of the lid. The smell of the sweet juice attracts insects. Once the insect alights, the hairs prevent its leaving. It slides down to the base of the tube, where it drowns. After a while, the plant digests the insect. The globe-shaped flower of the pitcher plant grows singly on a long, slender stem. It is a deep reddish-purple color. The people of Newfoundland chose the pitcher plant as their provincial flower. A pitcher plant with yellow flowers grows in the Southern States. It has tall, erect, trumpet-shaped leaves. Another species of the pitcher plant, the cobra plant, native to California. Most insects caught by this plant are killed. However, a certain moth and a species of mosquito make their home in the pitcher.