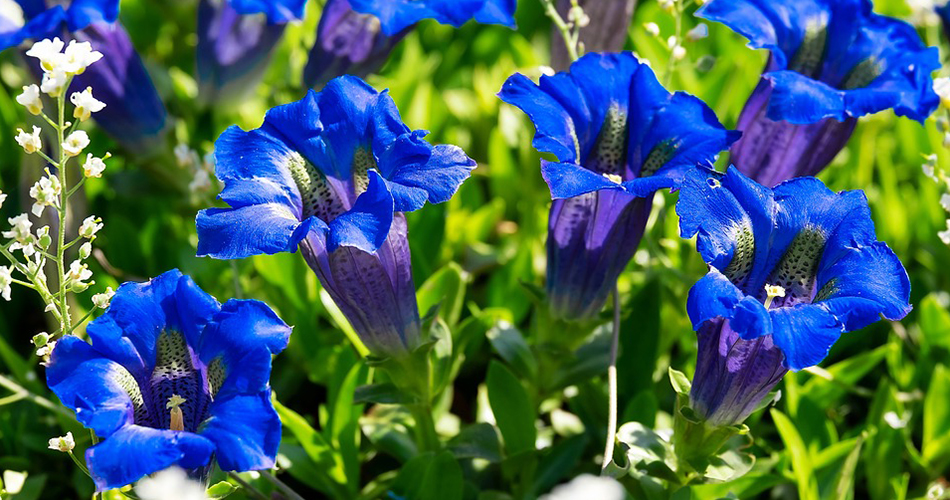 GENTIAN is any of about 400 species of herbs that make up the genus Gentiana.

These plants are supposed to have been named after Gentius, long of ancient Illyria. When the king was ill the root of a yellow wild flower was brought to him. He drank the bitter juices of the root and was cured.

This yellow gentian (Gentiana lutea) grows on the slopes of the Alps, the Pyrenees, and the Apennine mountains in Europe. It reaches height of three to four feet. Its roots are still used in the manufacture of medicine. Many species of gentian are found all over the world except in Africa. The blue, or Alpine, gentian (C. acaulis) is a small plant found in great abundance on high mountain slopes of Europe. Their masses of blue blossoms form a beautiful sight in midsummer.

The bottle, or closed, gentian (G. andrewsii) and the fringed gentian (g. crinita) grow in moist spots in the United States. The latter is one of the most beautiful of all wild flowers, but because it has been picked too extensively, it is now quite rare.

In England and the United States, gentians are cultivated as garden flowers, but are often difficult to grow well. The various species bloom from midsummer to early autumn.