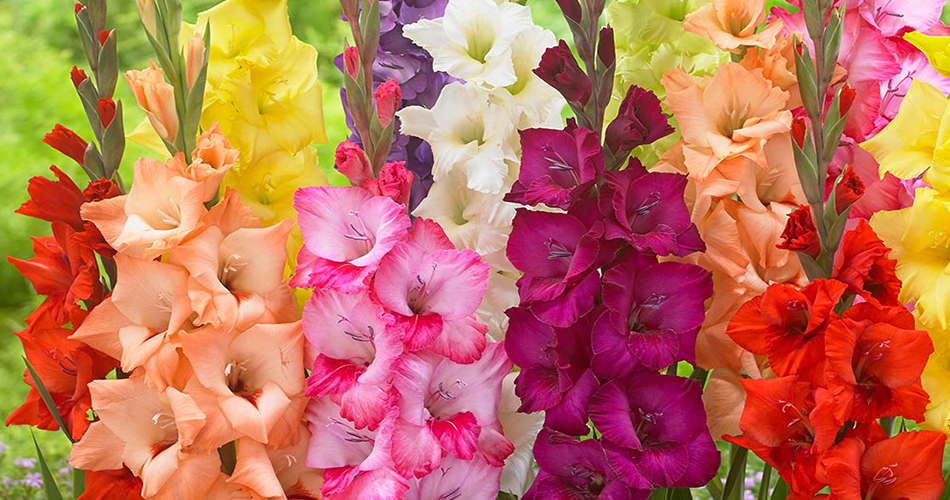 Gladiolus is any of several species of showy flowering herbs of the iris family (Iridaceae). It has broad flat leaves that resemble the blades of swords. The long, straight stalk and lily-like blossoms make the gladiolus one of the most handsome flowers grown for garden and house decoration. Native to South Africa, Asia, and Europe, the species of wild gladiolus have been hybridized and selected by plant breeders in Europe and the United States so that hundreds of different varieties are now known. Most of these cultivated gladioli reach heights of from three to four feet. Their blossoms grow usually in a double row on one side of the stalk. They appear in white and shades of yellow, lavender, smoky gray, maroon, red purple, and in a range of red, rose, and pink hues.

Gladiolus are generally raised from bulbs, which should be planted about three to five inches apart and five inches deep in rows at least one foot apart, or in garden beds, as tulips are planted. Well-fertilized, sandy loam is most suitable. By making successive plantings of bulbs at intervals of two or three weeks, from late March to middle June, one may have flowers continuously from July to frost.

New “bulbs” (really corms) are produced each year above the original bulbs, and small bulblets” (cormels) grow around them. The bulbs should be gathered in the fall after the first hard frost and stored in a cool room to be replanted the following spring. The bulblets may be replanted close together in shallow rows, like peas. In from one to three years, they will develop to flowering size. Most new varieties are raised from seeds. Seedlings bloom two to three years after the seeds are sown.