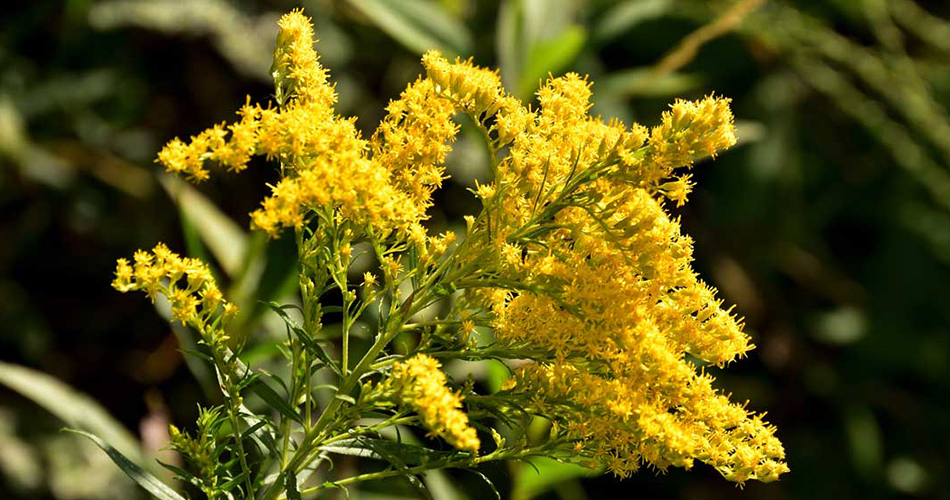 Goldenrod is a plant of the family Compositae. There are about 120 species, mostly native to North America. The goldenrod is often spoken of as the national flower of the United States, and in several states it has been adopted as the state flower. The numerous species vary in many ways. They grow on mountains or in plains, in swamps or in dry fields, along the roadside or by the sea. In size they vary from a height of less than one foot to eight feet. Their leaves may be notched or smooth-edged; their stems may be smooth or hairy. All, however, have tiny flowers which grow in thick clusters or long plumes at the end of slender stems, and are followed by feathery fruits and seeds. All are perennials, all belong to the composite family, and all bloom in summer or early fall. Perhaps the most common species is the Canada goldenrod, which has spreading clusters of bright yellow flowers. Among other common species are the sweet goldenrod, whose sweet-scented leaves are sometimes used in making tea or as a source of an oil used in medicine; the white goldenrod, or silverrod, which has creamy white blossoms and long, hairy stems and leaves; and the early goldenrod, whose plumed flowers are often dried for winter decoration. Goldenrods are often troublesome as weeds, since they crowd out less hardy plants and act as hosts to many insect pests and to various mildews and rusts.

They are often blamed for hay fever that is caused by ragweed, which blooms at the same time. Thomas Edison was interested in golden-rods as a possible source of rubber, but the yield of rubber is small in comparison with that of several other plants.