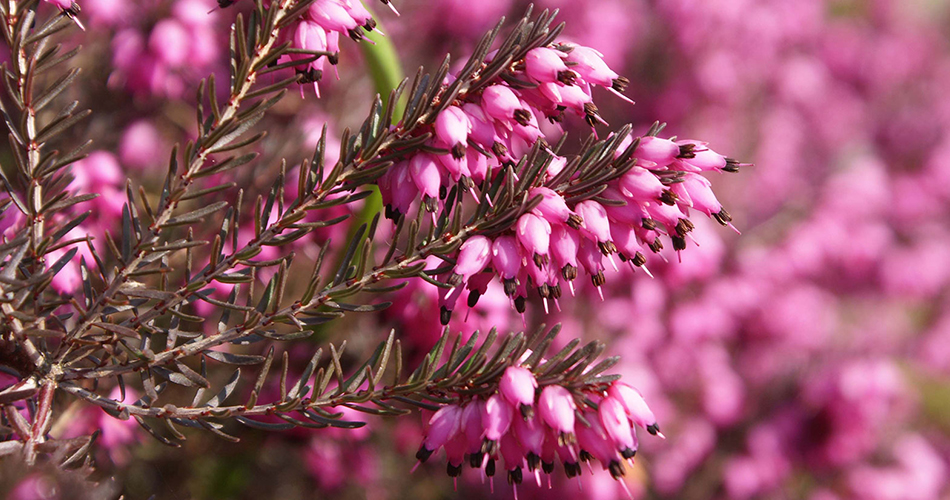 Heath. The word heathen originally meant one who lived on the heath, a term commonly applied to uncultivated land covered with low shrubs. The name heath was given also to any plant growing on the heath, but it is used botanically only for the species of the heath family, the Ericaceae.

Heaths, dunes, and moors have a similar origin and are made up of closely related plants. The shrubs known as heath have small evergreen leaves and bell-shaped four-petal flowers. The common ling, or heather, is the heath that covers the moors and heaths of Great Britain and much of the Continent. It has flowers of a lilac-rose color, rarely white, which grow in spikes. Beehives are carried to the moors during heather blooming time, since the little flowers produce an abundance of honey.

When tender, the plant is used as fodder. Mixed with oak bark, it is used in tanning. Its larger stems are used for brooms. Its small ones are tied into bundles for brushes, while the shoots may be woven into baskets. Heather when decomposed helps to form the peat commonly used for fuel in Europe. It is not this heather but two other species which produce the heather bells of Scottish song and story. There are about 500 species of heath, but none is native to North America. Some African species, however, are widely grown in greenhouses.